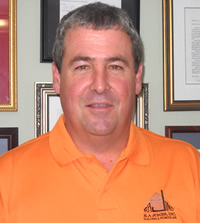 Since 1983, R A Jones, Inc., Building & Remodeling has been improving homes on the Peninsula. Over those 30 years we have grown – in knowledge and skills, in relationships and in technology. There is still more to learn, but the things we have accomplished so far have resulted in a home improvement company that is more than competent to provide the quality services our customers deserve. We take pride in our satisfied customers, sharing credit with our dedicated employee team, our subcontractors and our suppliers.

Visiting Newport News in 1982 from his home in Montana, Robert Jones recognized the potential for growth on the Peninsula. He saw an opportunity to provide his brand of quality building and started Robert A. Jones, Jr. Construction Company. Working with his tool belt during the day and meeting prospective customers in the evening, Robert built the foundation of R A Jones, Inc., Building & Remodeling.

Born in Newport News, Robert was a champion swimmer for the Hidenwood Tarpons, swimming across the James River at the bridge, with his swim coach in a boat beside him. Robert wanted to become a professional water skier but life took a different turn for him. His love of the outdoors was obvious at a very young age, encouraged and guided by his father, Bob Jones. Robert explored every inch of his side of Warwick Blvd for miles in each direction (his mother said he couldn’t cross Warwick), later exploring every country road for miles around. Family trips hiking in Shenandoah National Park, canoeing across Canada and boating and fishing at Lake Gaston and every other body of water within driving distance led Robert to an Outward Bound Wilderness trip in Washington State as a high school graduate.

While studying forestry at North Carolina State University, Robert decided it wasn’t what he wanted to do. Working to build the Surry Nuclear Power Plant, Robert was asked to join the company at their location in Wyoming.
He accepted and made his plans to be there in a couple of months. Starting on the Appalachian Trail in Front Royal, VA, Robert and his dog, Captain, spent the next several months walking his way to his new job in Wyoming. Eventually moving to Montana, Robert was hired to patrol logging sites on a motorcycle, chasing firewood scavengers off the sites.

This site uses Akismet to reduce spam. Learn how your comment data is processed.